This is a crisis: facing up to the age of environmental breakdown 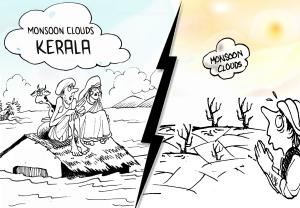 The world is facing unprecedented "environmental breakdown" which could threaten the stability of societies, warns this new report by the Institute for Public Policy Research (IPPR). Climate change and damage to land, soil, air, water and animal populations are happening at such a scale and pace that the window to prevent catastrophe is closing.

The gathering storm of human-caused threats to climate, nature and economy pose a danger of systemic collapse comparable to the 2008 financial crisis, according to a new report that calls for urgent and radical reform to protect political and social systems. The study says the combination of global warming, soil infertility, pollinator loss, chemical leaching and ocean acidification is creating a “new domain of risk”, which is hugely underestimated by policymakers even though it may pose the greatest threat in human history. The new paper – This is a Crisis: Facing up to the Age of Environmental Breakdown – is a meta-study of dozens of academic papers, government documents and NGO reports compiled by IPPR, a leftwing thinktank that is considered an influence on Labour policy.